On the 21th to 24th of February 2018, we are organizing the international workshop Hybridisation in Natural History? Materials and Texts Between Asia and Europe, 17th and 18th Centuries at the University of Cologne.

Within the project Circulation in Spaces of Knowledge Between Asia and Europe, our focus lies on works of natural history connecting the Moluccas and the Netherlands during the process of European colonisation in the 17th and 18th centuries. We are especially interested in the different “ways of knowing and working” (Pickstone) that contributed to G. E. Rumphius’ books on the Ambonese flora and fauna.

On the surface, the objects and texts of Rumphius’s natural history can easily be localised in a specific geographical place or a specific collective practice. When taking a closer look, a shell from the coast of Papua was purchased from a trader coming through the market in Kota Ambon, incorporating different ways of transporting, assembling, and ordering material in the process. A plant was cultivated only in gardens or plantations in Java, but formed part of the larger knowledge economy within the Dutch East India Company. Also, the plant could take on a double function as food and as medicine and consequently go through different cycles of commodification. The shell might have been transformed from animal into artefact on one of the Indonesian islands and subsequently into a curiosity in a Dutch cabinet. European and Moluccan knowledge interact in a hybrid natural history. A description of shells found while walking along the beach of Ambon was illustrated with copperplate prints depicting specimens from Dutch collections. For the textual representation of a shell, analogies and metaphors as well as the poetics of the rare, wonderful and marvellous were used. A narrative could be part of the depiction of a plant, thus combining local objects and local narratives with strategies of representation that originated in Europe.

The production and reception of knowledge about natural history is situated in cultural contact between Asian and European actors and framed as a process of circulation with dynamics that constituted new spaces of knowledge between Europe and Asia.

During this workshop our aim is to look at the idea of hybridity as double function or combination of elements, and to discuss evidence for hybridisation as a process from which something new and different originates in the production of knowledge (Bhabha). Themes to be addressed include, but are not limited to:

Get the pdf-version of the workshop programme here

If you would like to attend as guest, please register at niederlandistik

University of Cologne, Institute of Dutch Language and Literature

DFG-Project Circulation in Spaces of Knowledge Between Asia and Europe: G.E. Rumphius and his Texts, circa 1670–1755 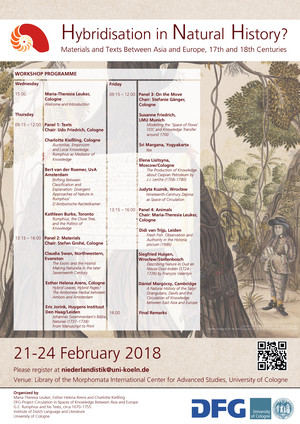